COVID-19 information is often described as an “infodemic” — a tidal wave of news good and bad. Political cartoonist Graeme Mackay played with this metaphor in his political cartoon from 11 March 2020 (Figure 1)*. The cartoon lent itself to being memed and by tracing its iteration, we can understand how discourse has evolved between partisans during the summer of the pandemic.

The cartoon resembles a template for object labelling memes. These memes place text on parts of an image to recontextualize it and show relationships between ideas. In this case, a larger wave looming behind the first readily sets the meme up for other interpretations, both serious and humorous. As it was popularized, the template was quickly altered: the Canadian context was removed and the waves were re-labelled as other issues (Figure 2).

In our sample, the conservative-leaning groups were largely content with the cartoon’s original message and typically retained the two waves with their respective labels, i.e. COVID-19 followed by recession. However, the left-leaning pages brought in new arguments by adjusting the template and adding new waves.

Left-leaning partisans first added a third green wave with the label  “climate change”, thereby positioning the impacts of global warming as an even greater threat than an economic recession or COVID-19 (Figure 3). While we are unsure of exactly where the meme originated, it gained considerable traction within our pro-NDP and pro-liberal meme pages and has become a commonly reposted meme within the comments section and across different Social Media platforms even beyond the Canadian context.

By adding a climate change focused wave, partisans pushed a narrative that critiqued the cartoon’s original message that presented an economic recession as the primary concern. For many meme posters, COVID-19 represents a threat but they strive to look ahead, not (only) to the recession but to the impacts of climate change. They argue that large cultural, economic, and social shifts are necessary to mitigate or hopefully even reverse the negative environmental impacts we are witnessing across the globe. Proponents of this narrative also claim that the importance of combating climate change does not only outweigh concerns about the recession but that climate change mitigation needs to be prioritized in the policies put in place to deal with the economic impacts of the pandemic.

While it seemed that many posters thought that climate change would be the penultimate wave, mid-July brought in a fourth wave: a larger black wave initially labelled “biodiversity collapse” (Figure 3). This wave maintained the theme of the climate change discussion, but pointed to even graver outcomes of this threat. In this manner, each wave behind the other points to a less immediate but larger issue, something the visual nature of the cartoon readily provides.

The possible collapse of biodiversity wasn’t the only message though. Other posters opted to make the fourth wave more relevant to the current political moment. Based off of Kanye West’s announcement and short-lived run in the American Election, one commenter relabelled the fourth wave as “Kanye,” (Figure 4), mocking the rapper-cum-politician’s brief foray into the 2020 election (Rolli, 2020), While a Kanye West presidential campaign and a biodiversity collapse are of course entirely different arguments, both used the same meme template. This exemplifies how  templates can be recontextualized to make arguments about a wide variety of issues, and put different spins on the original message of the meme. In this case, the template allows meme makers to rank issues they consider less important or more urgent concerns.

Unexpectedly, the meme transformed again, moving beyond the typical wave format. Individuals “deep fried” the template (Kowalchuk, 2018), adding in visual cues that addressed the repeated expansion of the meme’s scope and commented on the arguments that were developing. In this case, they took a three-part image that showed the meme’s progression with additional waves being included, and placed an overly filtered comet on it which they labelled “Heat death of the universe” (Figure 5). Deep fried memes typically make an ironic argument about the overall trajectory of a meme template. In this case, the deep fried meme suggests that there are always impending dangers that supersede others. This final iteration is taking the argument to the extreme as a way to poke fun at the ever-growing number of waves that seem to suggest that the world is simply doomed.

Conclusion
Tracing the transition of the template from March to late July illustrates the changing arguments and concerns that different groups had during the pandemic as well as the habits of meme-making. Initially, COVID-19 was outweighed by a looming economic recession. However, climate change soon became the “third wave” quickly followed with an array of fourth waves. Importantly, this meme was picked up and used beyond our sample where the waves were re-written as a variety of different things. However, the use of this template within our partisan groups emphasizes how political arguments, ideas, and cultural events get picked up in partisan meme-making. Finally, within our sample, the final format of the meme was a meta analysis of the format, arguing that the impending heat death of the universe supersedes the other concerns that people hold towards COVID-19 or any other impending tidal waves. The “Heat Death of the Universe” is so far beyond the meme’s initial scope that it offers a critical argument about the legitimacy of all of the claims, while being self-reflexive in the process and development of meme creation.

*Mackay’s initial cartoon first appeared as a political cartoon in the Hamilton Spectator, acting as a critique about the severity of the COVID-19 pandemic and the measures set in place. It posited that Canadians should be on the lookout for the economic consequences related to the pandemic, not just the pandemic itself. Political cartoons are considered historic predecessors to object labelling memes (KnowYourMeme.com, 2020). 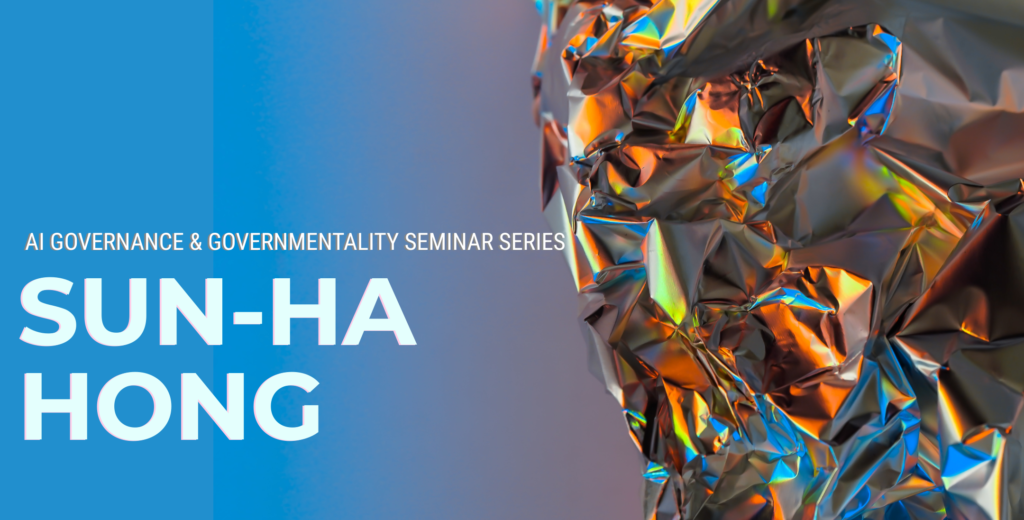 Dr. Sun-ha Hong presents their new book, Technologies of Speculation: The Limits of Knowledge in a Data-Driven Society.

This event is part of the Fall Lunch Seminar Series on AI Governance and Governmentality.

Technologies of Speculation traces this twisted symbiosis of knowledge and uncertainty in emerging state and self-surveillance technologies. It tells the story of vast dragnet systems constructed to predict the next terrorist, and how familiar forms of prejudice seep into the data by the back door. At the same time, smart machines for ubiquitous and automated self-tracking are manufacturing knowledge that paradoxically lies beyond the human senses. For some, such a surfeit of data can seem an empowering thing, an opportunity to stride boldly towards a posthuman future. For others, to appear correctly in databases can be the unhappy obligation on which their lives depend.

Dr. Sun-ha Hong is an Assistant Professor of Communication at Simon Fraser University. Their work asks how new media and its data become invested with ideals of precision, objectivity and truth – especially through aesthetic, speculative, and otherwise apparently non-rational means. Dr. Sun-ha Hong analyses the contemporary faith in “raw” data, sensing machines, and algorithmic decision-making, and of their public promotion as the next great leap towards objective knowledge.

The seminar will take place on Zoom. Please register here.

This event is supported by the Social Sciences and Humanities Research Council and the Milieux Institute, and organized on behalf of the Machine Agencies Working Group and the Algorithmic Media Observatory. 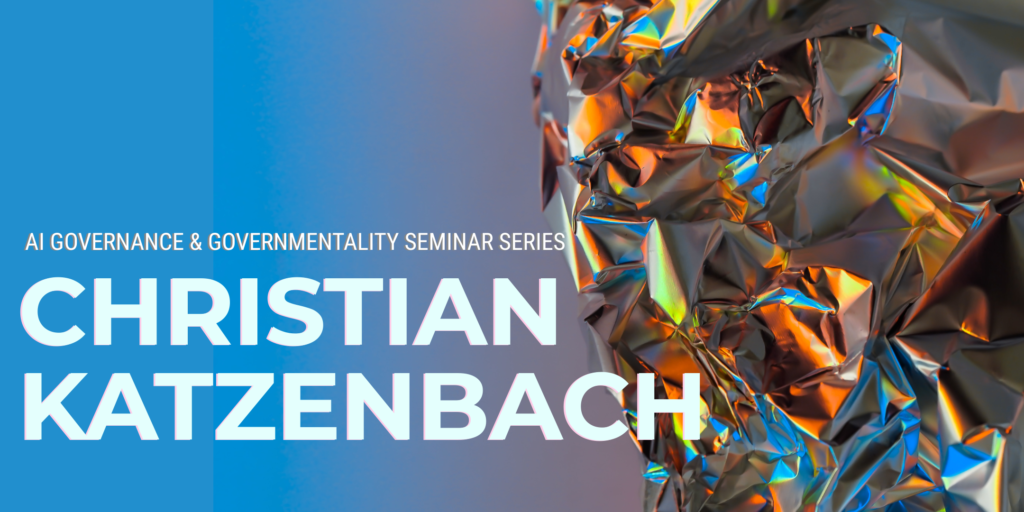 A leading global scholar on platform and AI governance, Dr. Katzenbach introduces a framework for the contested, informal governances of AI.

This event is part of the Fall Lunch Seminar Series on AI Governance and Governmentality.

About this event
Facial recognition, digital contact tracing and content moderation have all been major controversies involving AI in 2020. How do these controversies shape the global governance of AI? A leading global scholar on platform and AI governance, Dr. Katzenbach will introduce a framework for the contested, informal governances processes of AI unfolding across research, policy and media in Canada, France, the UK, and Germany. These controversies shape understanding of what kind of AI comes into being, which problems and challenges are to be addressed, and our expertise to shape its future developments for the public good. As scandal and outrage give way to public debate and regulation, Dr. Katzenbach will outline a way to understand a dominant concern for the future of media, social and technology policy.

The seminar will take place on Zoom. Please register here.

Supported by the Social Sciences and Humanities Research Council and the Milieux Institute. Organized on behalf of the Machine Agencies Working Group and the Algorithmic Media Observatory.

The team of the Algorithmic Media Observatory is excited to announce a series of four talks during the 2020 fall term. We invite everyone to join us in discussion with these fantastic speakers:

Louise Amoore
Tuesday, November 10, 2020 at 12:00 PM EST
Dr. Louise Amoore presents their new book, Cloud Ethics: Algorithms and the Attributes of Ourselves and Others.
For details and registration, see here.

The series is open to everyone. Please register in advance for each event to receive the Zoom link.

Supported by the Social Sciences and Humanities Research Council and the Milieux Institute. Organized on behalf of the Machine Agencies Working Group and the Algorithmic Media Observatory.