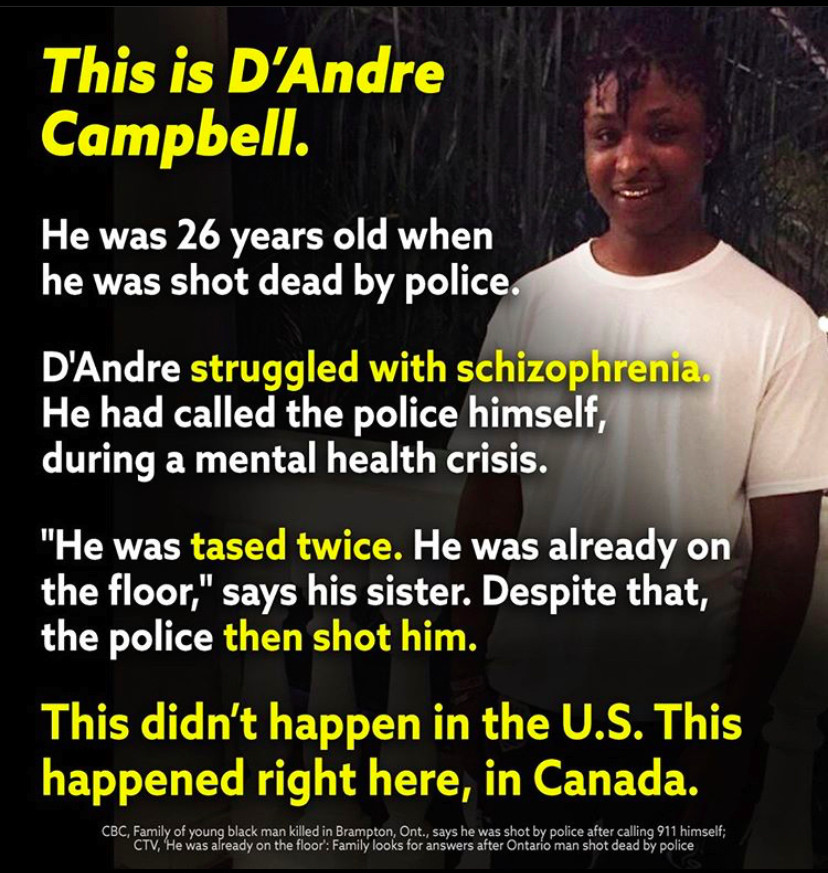 Lately, Canadian political memes on all sides have been focused on systemic racism. Since global protests supporting Black Lives Matter began, we observed a shift away from pandemic-related content to posts discussing systemic racism in Canada, mass protests, and police violence. This shift in focus has proven more dramatic and sustained than any we have seen so far.

Groups once talking about toilet paper hoarding, health workers’ pay, or Justin Trudeau’s “speaking moistly” (Figs. 1, 2 & 3), now focus on Black Lives Matter and acknowledge the specific context and implications of systemic racism in Canada. Typically, Canadian discussions have focused on the United States’ record of systemic racism, which has cultivated ignorance of our own history and current reality. The meme in Figure 4 mocks this tendency. This and other memes aim to stimulate conversation on the link between our legacy of colonialism and racially motivated police violence. As we have learned from writers including Eve Tuck (2012), Robyn Maynard (2017), and Desmond Cole (2020), Canada has its own history of anti-Black racism that must be understood alongside ongoing genocide and disenfranchisement of Indigenous peoples in Canada (National Inquiry into Missing and Murdered Indigenous Women and Girls (Canada) et al., 2019).

While some might be quick to label this conversation as divided along partisan lines, the discourse has found broad engagement. Though right-leaning pages are more reticent to acknowledge anti-Black racism, meme pages on both the left and the moderate right posted the meme in Figure 4, hinting that awareness of Canada’s ongoing violent colonial actions is not a partisan position. In fact, we are observing a definitive anti-police sentiment across our partisan pages.

Most saliently, these groups engage with the hypocrisy when protests about police violence led to further police violence. Despite this similarity in overall sentiment, partisan groups have differences in what parts of the issue they most care about. Right-leaning pages, while critical of police violence, are less likely to address issues of race, and, while in support of change, are not in support of defunding the police: a rhetoric commonly found on the left-leaning pages we are following. Importantly, their willingness to engage in memeing about anti-state violence demonstrates a point of convergence among ostensible ideological opposites. However, this does not mean that these positions are uncontroversial. Pages and their audiences sometimes disagree, such as the case of one commenter reacting to the @canadianlibertarians post (Fig. 5) saying “is this a joke??”

Left-leaning sites, particularly pro-NDP pages, share memes in support of direct action. While this can not be equated with a wholesale endorsement of violence or damage to property, it does demonstrate a willingness to consider a wider range of protest tactics than other groups. Memes shared by the pages such as Figures 6 and 7 are attempts to demonstrate the validity of such actions given the context of their deployment. Calls for “taking the anger out at the voting booth” have been wholly rebuked, as in Figure 8. This skepticism for the efficacy of elected officials has extended to the Prime Minister himself. Justin Trudeau joined a Black Lives Matter demonstration at Parliament Hill on June 6th and took a knee alongside protesters (Asmelash, 2020). This gesture drew the ire of partisans across the board (Tasker, 2020). Many drew comparisons to his participation in the Montreal Climate March in September 2019, as both incidents were seen as largely empty actions devoid of the will to implement meaningful change.

Memes related to the Black Lives Matter protests differ in style to past memes. Unlike COVID-19 memes, which attempted to stay somewhat lighthearted in tone, they strike a balance between seriousness out of respect for the victims of police violence and humorous recognizable meme formats to maintain visibility. Our observations noted that some posts aim to educate the audience about the specificities of police violence in Canada, particularly those which use news stories as an example, such as in the case of D’Andre Campbell (Kelley & Syed, 2020). These posts flouted the normal aesthetic considerations of visual internet vernacular in favour of novel or proprietary styles, as seen in Figure 9 — perhaps as an attempt to distance the serious subject matter from any possible humorous readings, as traditionally dank meme formats are embedded within humorous contexts and provide ample creative possibilities for reproduction (Literat & Berg, 2019).

The progressive third party North99 has demonstrated through their Instagram pages that they are particularly adept at wielding visuals that do not adhere to standard meme aesthetics. These graphics are designed to quickly and decisively inform their audience on the chosen issue. These often include citations and highlighted keywords to allow for easy understanding of the issue at hand, with the added confidence of trusted sources (see Figure 9).

Interestingly, discussions of the coronavirus have not been jettisoned entirely from our pages. Many commenters have brought the issue of transmission to the forefront on posts about protests, while the pages and groups themselves have pointed to the need to protest structural racism in this moment, given that it links racially motivated police brutality and the disproportionate effect of the pandemic on BIPOC communities (Robinson & Nnorom, 2020). Despite expert evidence that the protests have not made a major impact on the transmission of the virus (Law, 2020), some memes have identified the demonstrations as hypocrisy of the highest order and blamed them for the oft-mentioned coming “second-wave.”

As June has come and gone we are observing a gradual dwindling of Black Lives Matter and anti-police meme posting. However, the legacy of this period will remain within these communities. As each page has interpreted the events of the past month for their audience, many have deepened existing ideological coalitions and forged new ground. Whether this period brings about tangible change within Canadian institutions remains to be seen. However, it will undoubtedly be remembered alongside other moments of intense upheaval which mark a turning point in public opinion. Moreover, it has affirmed that memes are not merely frivolous images, but are capable of discussing important topics with wit and candor.